Can you wash a dog with regular shampoo?

In short: no. But why is that? Keep on reading to find out why you shouldn't wash your dog with regular shampoo.

If you are running low on supplies, you might not realize how harmful it could be to easily slip in some human shampoo during your dog’s bath time. Depending on the breed of your dog, the fur they have, their age, and any conditions they may have, you might be doing more harm than good.

If you're wondering what could possibly be the problem in pouring in a little L’Oreal during bath time, the effects of the quick solution to your doggie-shampoo-less problem could create you even more problems than before. 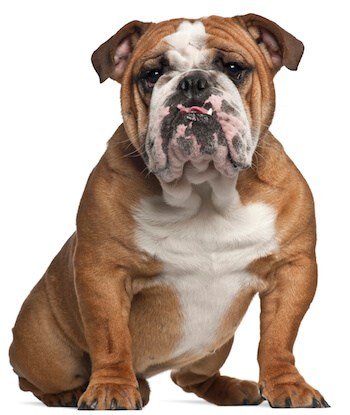 To get a little scientific with you, let’s talk a bit about the skin.

The acid mantle is one of the most important parts of the skin. It’s the layer that covers the entire organ, which protects the porous, topmost layer, called the stratum corneum. It is responsible for rebounding, protecting, and keeping bacteria and viruses away.

The stratum corneum also plays a pretty significant role in keeping the skin hydrated as it absorbs water from the outside of your body and prevents excessive evaporation of water and drying of the skin. An important part of the skins barrier function are lipids that block the movement of water, electrolytes, and micro-organisms.

When you use shampoo and soap (on you and your dog), you're washing away this lipid layer, which is why it’s important to look out for suitable and gentle ingredients that do not remove the lipid barrier. When that layer is stripped, your dog’s body is then prey to microorganisms and evaporation of moisture from the outer layers of the skin, which may leave your pup with dry, flaky, irritated, and peeling skin, or with a rash. 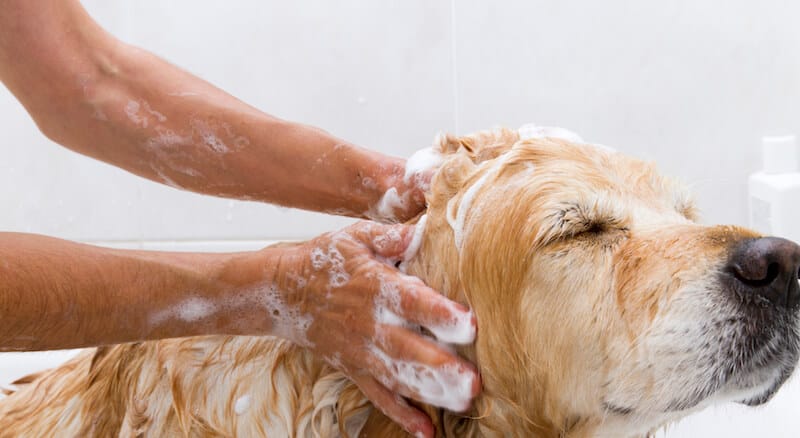 The acid mantle is the thin slightly acidic film on your skin which protects it from bacteria, viruses and other contaminants. This acid mantle can be measured as the relative pH balance of the skin. This pH balance is measured on a scale from 0 to 14. The levels 0-6.4 are considered acidic, whereas above 6.4 are alkaline.

In humans, the “normal” considered PH balance is between 5.2 to 6.2. Therefore, natural is considered acidic. Human shampoo is actually carefully formulated to adhere to these numbers and keep your skin balanced.

If you're comparing dogs to humans, however, there’s a bit of a difference.

The skin's pH balance of dogs is largely based on their breed, gender, and size. However, typically, a dog’s average pH level will be from 5.5 to 7.5. This range is on average higher than humans, making it much less acidic.

You can imagine, then, what it would be like if you use a shampoo that is formulated for the human skin on a dog! Their skin and the topmost layer will be disrupted from its norm and become a breeding ground for bacteria, viruses, and parasites.

Unfortunately, some pet owners don’t know about this imbalance, and since there is a smell created by all the bacteria, they'll keep washing their dogs with human shampoo—making it much, much worse. The dry skin is also a problem because it will make the dog scratch it, making abrasions where the bacteria can easily get into.

Also, in comparison, a dog’s skin is much more sensitive than ours. We have about 10-15 layers of skin, whereas a dog only has 3-5. This fact makes it much more harmful and creates a much bigger problem if we wash them with the wrong pH balance or harsh chemicals (like those found in human shampoos). Especially if you have more than one breed at home, it might be tempting just to use one shampoo for all your pups. Even though that might save you a few bucks, it won’t do your pooches any good.

There are certain factors or specific details to look out for in dog shampoos.

First of all, it’s extremely important to know about the ingredients that are in the shampoo. Certain ingredients can be beneficial and geared toward specific factors that may sway your shampoo-purchase one way or the other.

A few of these ingredients high on the veterinary-approved list are:

Investing in a doggy shampoo that has these ingredients is an important investment in your pup’s health. However, since there are so many shampoos to choose from on the market, there are quite a few factors that can help you decide which shampoo is best:

MORE: The best Shampoo for a Golden Retriever

The Age of Your Dog

Especially if you have a younger pup on your hands, you'll want to make sure that the puppy shampoo is fit for their age range. Especially since their skin is already pretty touchy with the pH balance, you'll need to get a shampoo that reflects that gentleness. Most puppy shampoos are also fortified to be much more gentle on the eyes, as well (just like human baby shampoos).

The Condition of Their Skin

If you have noticed that dog dandruff has been a persisting issue, you might want to make sure that you find a shampoo that tailors to it. Certain shampoos are designed to help out if your dog has dry, itchy or flaky skin. These shampoos usually have a built-in moisturizer, which will alleviate your dog’s skin from the dryness.

If their skin condition is a problem, you'll want to avoid buying and using scented shampoos as much as possible, since the chemicals that are in these shampoos normally irritate the skin. Look for shampoos with all-natural ingredients. You'll usually find them with ingredients like honey, oatmeal, and vitamin E. If their skin condition seems to be getting beyond your control, then you might want to consider contacting your vet.

Tangles in Their Fur

Especially if your dog has a long wiry coat, you may notice that the fur gets easily matted or tangled, which makes them look dirty. When giving them a bath, choose a shampoo that also has a built-in conditioner to keep their coat shiny, moisturized and easier to maintain (without all the tangles).

Your dog also might come from a breed that has frizzy curls. You can even treat this issue like a head of human hair and try to go the shampoo-then-condition route by buying separate bottles. The conditioner can help boost natural oils and help with the process of detangling. 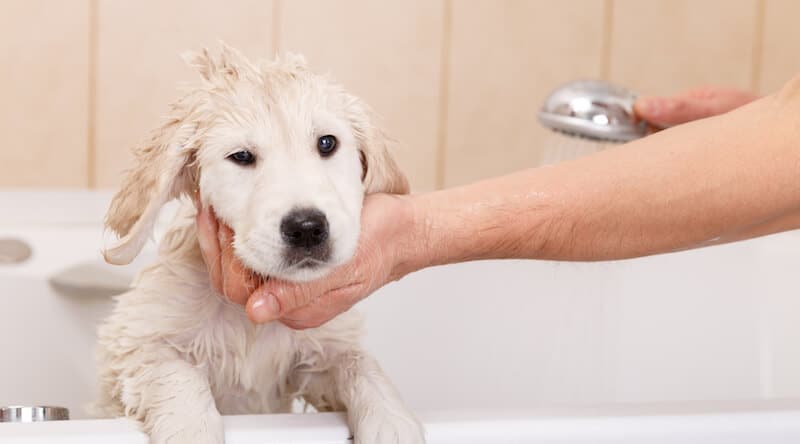 The (Unnatural) Odor of Your Dog

Your dog loves to play outside, which is really a great thing to see, especially when they're having a blast out in the yard. However, when you let them loose, they might get into garbage, food, and God knows what else. Before you know it, your stinky pup is getting into the back of your car extremely happy about the wonderful day with all the different smells he just had.

Unfortunately for you, you have to put a damper on his day and clean him up. Little does he know, bath time is right around the corner. Your weapon of choice should be a deodorizing shampoo that eliminates unpleasant odors instead of masking them. That way, even long after the pleasant scent of the shampoo is gone, your dog will still smell clean.

If They Have Fleas and Ticks

Your vet might recommend some sort of medicated shampoo or flea and tick products to take care of your jumping and biting problem (the fleas and ticks—not the dog). There are so many different types that can be purchased without a trip to the vet that can take care of fleas, ticks, and other parasites. Of course, you'll want to take the other measures to try and get rid of fleas and ticks (here's an article on that), because the shampoo is usually just a short-term relief.

Even though a lackluster coat can be from a poor diet or failing health, a little bit of a quality shampoo can boost the color and shine of your dog’s fur.

These shampoos offer tons of vitamins, proteins, and other minerals to target your dog’s fur and really get their coat shining like brand new. For Dogs and Owners On-The-Go

Just like there are dry shampoos for humans, there are also those for dogs. Especially if you and your family (fur-babies included) are on the road and you have no place in your schedule or resources for dog bath time, dry shampoo can be a handy solution to get your dog clean and smelling almost back to normal.

There are a few waterless shampoo options out there and even wipes when you're really in a rush. You can even resort to these if your dog doesn't like water.

For the White-Colored Coat

If your pooch has a white or light-colored coat, you might come to find out that the fur tends to fade or yellow. Fortunately, there is a shampoo that is designed just for light-colored coats. It makes their coats brighter and whiter, without harming your dog.

Check Before You Choose

Last but not least, not all dog shampoos are of high quality. Especially if your pup has a special condition, you really should check with your vet about the proper shampoo for their coat or state. They will most likely recommend a perfect shampoo for your dog, and you won’t have to worry about making the decision at all.

The bottom line here is to never use shampoos or conditioners on your dog that are made for humans. It can create much more damage than cleaning your dog, so go out and make the small change to dog shampoos!

Matt is the founder of PetHairPatrol.com and has years of experience helping pet owners keep their homes clean. He's been featured in publications like Reader's Digest, Money, and BestLifeOnline. When this neat freak is not searching for better ways to get rid of pet hair, dander, and other messes pets leave behind, he's usually enjoying outdoors with his two (hairy) Goldens: Ben and Jerry. Read more.